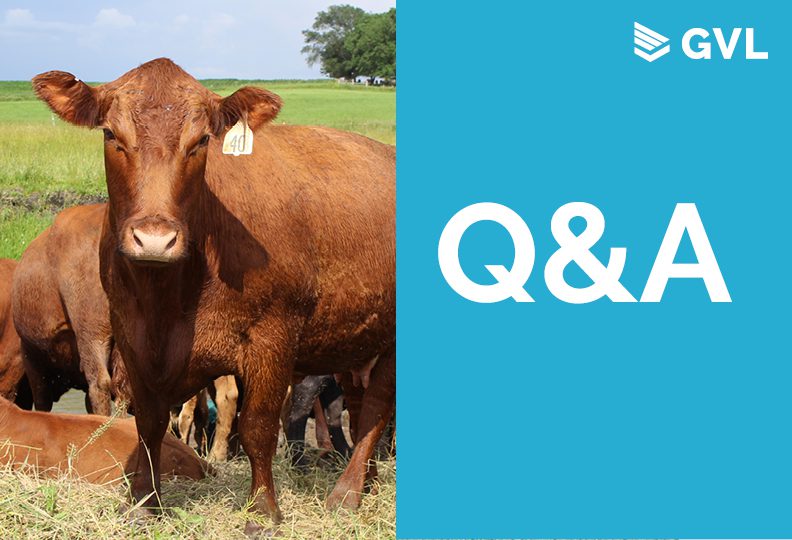 In our recent webinar, Interstate Travel and Movement Compliance for Cattle (recorded 3/24/21), Dr. Amanda Price dives deeper into moving cattle throughout the US, including the identification, testing, and documentation requirements.

Here, we’re sharing resources and summarizing Q&A from the webinar. If you still have questions related to compliant movement of cattle, please let us know and we’ll add them to this list.

Questions and answers from the webinar

There were many questions submitted by webinar attendees, and not all of them could be addressed in the hour-long session. We have compiled the questions and worked with the presenters to provide answers to the best of our knowledge. Click on a topic to expand the Q&A.

I think, based on this question, you are actually asking about the consignee (the buyer). You should contact the State Veterinarian in the state of destination and ask how they want it handled. Some may insist on that information and others may not. If they insist on that information, you can’t write the health certificate until the order buyer provides it. If the State Vet is just interested in the destination, you will have met their requirements.

Unless we have a foreign animal disease outbreak like FMD, I don’t foresee any states having additional health requirements for animals that are passing through the state without stopping. The reason I say that we may require it during a disease outbreak is because of the potential for windborne spread of that disease to animals alongside the roadways. If animals are being let out for rest, feed, or water in a state, I could see the need to meet the health requirements in that state. This is because they will probably be let out in a pen that other animals will also be rested/fed in. This would increase the risk of disease transfer between groups of animals and potentially the spread of disease to animals in that state. I don’t know of any states that currently require this.

I think that depends on the state of destination. In the 13 years that I was in practice, I almost never had the seller/consignor sign the CVI, and I never got pushback from any of the states. If they are present while you are writing the CVI, go ahead and have them sign it.

The USDA has allocated free RFID tags to each state for use by veterinarians and producers. Contact your State Veterinarian to determine if these tags are available to veterinarians in your state (they may only be giving them to producers or restricting them for use in heifers). If they are distributing those tags to veterinarians, you will need to provide your clinic’s federal premises ID number (they will probably be able to look this up for you). Here in Utah, we then assign those RFID tags to a location through the brucellosis vaccination forms, CVIs, or other paperwork that includes the official ID numbers that veterinarians submit to our office.

You will need to provide those RFID tag numbers to your State Veterinarian’s office when you submit your brucellosis vaccination paperwork. Either you can scan the tags or have the dairy scan the tags so you have the list.

Absolutely! Here is the link to that video: https://www.youtube.com/watch?v=BMAGVeZ3waU

There are several reasons for this. First, bovine tuberculosis has a wildlife reservoir in parts of the country, such as white-tailed deer in Michigan. These animals can go on and off of farms, especially pastures, and spread the disease to new herds.

Second, the Caudal Fold Test (CFT) only has a sensitivity of 80-85%, so it can miss 10-15% of positive animals. TB is present in cattle in Mexico, and Mexican cattle frequently cross the border into the US. Because the CFT is not a perfect test, there is a risk of an infected animal entering the US without being detected.

Also, the CFT is usually only done when animals are moving. There may be positive farms that we won’t know about until cattle are tested for movement or a granuloma shows up at slaughter.

Third, there is a risk of infected workers giving the disease back to cattle. To this point, there have not been any proven cases of that happening, and it is such a slow-growing bacterium that it would be hard to prove that it went from humans to cattle instead of cattle to humans. Cattle owners should be aware of the potential for this to happen and may want to consider requiring a TB test from their workers at the start of employment.

The gamma interferon test was very popular for a few years as a confirmatory test. However, there were problems with the test and they stopped using it for several years. (I can’t remember if it had a high rate of false positives or false negatives.) After further testing, they developed the current protocol, which is that the blood samples must be at NVSL in Ames, Iowa, within 30 hours of being drawn. Because of the critical timeline on this test, NVSL must be notified in advance so they are ready to test the samples as soon as they arrive. For more information on the gamma interferon, contact your state USDA Veterinary Services office.

You can list the official ID on a GVL CVI when creating the animal or animal group. This video provides an overview of creating a production animal CVI, including how to add IDs from a spreadsheet to an animal group.

Additional instructions for adding individual IDs and adding IDs from a spreadsheet can be found in the GVL Help Center.

This will lock the certificate from editing and provide you with the certificate number. Once you have obtained your permit number, you can enter it on the GVL CVI and sign the CVI.

There are two pricing plans for GVL, a monthly subscription plan, and a per certificate plan. Our sales team would be happy to provide you with additional information and find the best plan for you. You can Sign Up via our website, or call our team at 515-817-5703.

With no monthly minimums or subscription requirements and unlimited user accounts for veterinarians and staff, GlobalVetLink brings you the most convenient and comprehensive platform for animal health and movement regulatory compliance.

Create your GlobalVetLink account today to get started automating accurate compliance documents in under 5 minutes. Choose the right plan based on your document volume.